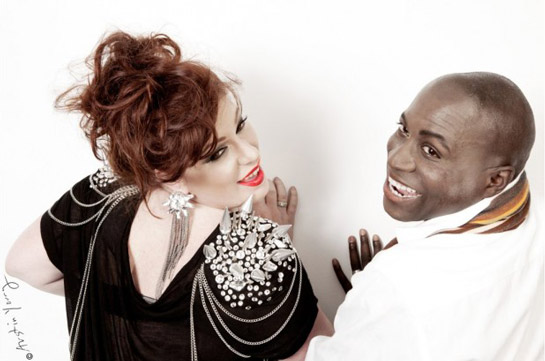 The multi-hyphenate Diana Coney (aka Gooch) is gatekeeper to some of the leading creative talents in Los Angeles and indeed the world.  As an agent/manager/producer, she currently represents and works with a stable of talent which includes photographers, stylists, videographers and performance artists like Traver Rains, Raja and Austin Young.  Prior to taking on her current role, Diana traveled the world as a producer for iconic photographer David LaChapelle. Over the years the stars she has worked with are too numerous to count and too big to mention.

Duane Wells (aka Gertie) pens Moxie Q’s weekly travel blog entitled “Living Wells”. The former Managing Editor of GayWired.com and host of “Here’s The Thing,” an hour-long daily gay travel radio program. Duane is currently traversing the globe seeking out the best in travel as a frequent contributor to a number of travel and lifestyle publications in the United States, Canada and the United Kingdom including Passport, Homefront and Frontiers, as well as other online resources including Advocate.com and GayTravelNews.

Where and when did you two meet?

Diana: At a mutual friend’s brunch on the morning of Los Angeles Gay Pride 2001. I had just moved to LA the day before and thought every day must be like that! Wait…. It kind of has been!

When did you realize she was your best friend?

Duane: When you pass out and wake up at someone’s house more than three times and feel no shame about it, he or she might be your BFF…tha’s what I think.   Seriously though…

I was on a trip with a group of gay journalists many years back where I couldn’t stop telling Diana stories.   It was Diana this, Diana that, Diana all the time.   By the end of that trip, every one of the journalists either wanted to meet Diana or be Diana.   They were all absolutely enamored of her as most people are. Funny enough, that still happens today.

My stories with Diana are still the most memorable and I can’t stop telling them.   Somehow we always manage to make magic.   Whether we’re slumped on a couch in her living room drinking wine and watching movies, singing Cher songs in a parking garage, or at the most brilliant event ever, the magic follows us.   You know you’ve got a BFF when your favorite memories always involve them.

What do you trust more- his relationship advice OR his style advice?

Diana: Although I have grown to value both, at first glance, definitely Duane’s style. He was wearing an ascot in June for god’s sakes!  That’s not to say he has not delivered more than his fair share of relationship advice and he has never steered me wrong, many times telling me when to hold ‘em and when to fold ‘em.

Fierce (Diana was fierce long before the word became fashionable…in fact she made it fashionable); Fun (if you’re not having fun around Diana, then you’re probably really boring); Loyal(When you become a part of Diana’s menagerie of friends, she protects you fiercely.   Few get in, but even fewer get out)

Wha’s the one piece of advice that has stuck with you the most?

Diana: Do what you love to do and everything else will fall into place. I admire Duane because he has always done just that, consequences be damned!

How long do you wait to introduce your BFF to the new guy you’re dating? Why?

Duane: Well to be honest, there haven’t been many dates to introduce Diana to because I have what I call the “six-month rule”.   I believe for the first six months you’re dating anyone you’re dealing with their representative and not the real person. So why would I introduce my friends to someone I don’t really know?

So given this rule, combined with the fact I haven’t had a relationship that has lasted longer than six months in over a decade, this hasn’t really been a problem.

However, there was this one gorgeous guy I was a little infatuated with awhile back.   At an impromptu birthday party, after a few cocktails, I announced that my “date” for the evening was my “new best friend”.   With a raised eyebrow, Diana sipped her cocktail and gave me a look that said ‘Oh really?  Calm down mister sister!’  I never made that mistake again.

Share the skeleton — what is the weirdest thing you two have done together?

Diana: Our whole friendship has been based on odd scenarios that seem to find us.   There was the 4th of July alien-abduction or that fateful trip to Mexico which nearly cost us our friendship. But in the end we’ve always been able to laugh about it.

Wha’s your biggest fashion Do & Don’t for her?

Duane: I honestly don’t have a fashion do or don’t for Diana because she lives fashion and beauty like few people do.   Seriously…drag queens don’t know fashion and beauty as well as Diana…this woman won drag contests as a teenager for chrissakes. Think about that!

She knows herself, she knows what works for her and she knows how to make an entrance. I have never seen anyone …not even a professional make-up artist… who can paint a face, upsweep a ‘do’ and be camera ready in under 20 minutes.   If anything, I actually learn about fashion from her.   She’s taught me to be more daring, more rock n’ roll and more bold…she’s the Karen to my Will.

Has he ever forced his opinion on you? Did you listen?

Diana: Force?  God bless the man who thinks he could.    I always listen, then give my opinion and then we generally compromise.   The whole function of a great friendship is trusting and valuing each other’s opinions.

Where would you like to see your GBF in 5 years?

Diana: Writing an article for Vanity Fair as he sips Veuve on his yacht in the south of France.

What is the best advice she’s ever given you?

Duane: “C’mon girl…have a drink!”  That one drink which has always turned into many more has also given birth to some of the best times and wildest nights I’ve had in Los Angeles.   So I guess the subtext of the drink was really ‘live a little’ and, my oh my, have Diana and I done just that.

What is your ideal day together?

Duane: An ideal day with Di would go something like this…Wake up in the same place after a sleepover, lie in bed and recap the night while watching E! and talking about people…pop out for a mimosa-filled brunch, do a bit shopping, then head home for a costume change, tip out to a cocktail party, stop in at some other event, drop by Fubar for last call… and then head home for after-hours and a wig marathon. Basically a repeat of Saturday before last.